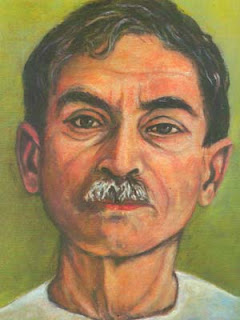 Born: July 31, 1880
Died: October 8, 1936.
Achievements: Premchand brought realism to Hindi literature. Premchand wrote on the realistic issues of the day-communalism, corruption, zamindari, debt, poverty, colonialism etc. He avoided the use of highly Sanskritized Hindi and instead used the dialect of the common people.

Premchand popularly known as Munshi Premchand was one of the greatest literary figures of modern Hindi literature. His stories vividly portrayed the social scenario of those times.

Premchand's real name was Dhanpat Rai Srivastava. He was born on July 31, 1880 in Lamahi near Varanasi where his father Munshi Azaayab Lal was a clerk in the post office. Premchand lost his mother when he was just seven years old. His father married again. Premchand was very close to his elder sister. His early education was in a madarasa under a Maulavi, where he learnt Urdu. When he was studying in the ninth class he was married, much against his wishes. He was only fifteen years old at that time.

Premchand lost his father when he was sixteen years old. Premchand was left responsible for his stepmother and stepsiblings. He earned five rupees a month tutoring a lawyer's child. Premchand passed his matriculation exam with great effort and took up a teaching position, with a monthly salary of eighteen rupees. While working, he studied privately and passed his Intermediate and B. A. examinations. Later, Premchand worked as the deputy sub-inspector of schools in what was then the United Provinces.

In 1910, he was hauled up by the District Magistrate in Jamirpur for his anthology of short stories Soz-e-Watan (Dirge of the Nation), which was labelled seditious. His book Soz-e-Watan was banned by the then British government, which burnt all of the copies. Initially Premchand wrote in Urdu under the name of Nawabrai. However, when his novel Soz-e-Watan was confiscated by the British, he started writing under the pseudonym Premchand.

Premchand was a great social reformer; he married a child widow named Shivarani Devi. She wrote a book on him, Premchand Gharmein after his death. In 1921 he answered Gandhiji's call and resigned from his job. He worked to generate patriotism and nationalistic sentiments in the general populace. When the editor of the journal _Maryaada_ was jailed in the freedom movement, Premchand worked for a time as the editor of that journal. Afterward, he worked as the principal in a school in the Kashi Vidyapeeth.

The main characteristic of Premchand's writings is his interesting storytelling and use of simple language. His novels describe the problems of rural and urban India. He avoided the use of highly Sanskritized Hindi and instead used the dialect of the common people. Premchand wrote on the realistic issues of the day -communalism, corruption, zamindari, debt, poverty, colonialism etc.

Premchand's writings have been translated not only into all Indian languages, but also Russian, Chinese, and many other foreign languages. He died on October 8, 1936.
Posted by Bharat at 06:07